Home  »  Politics   »   When Political Partisanship And The Military Collide : NPR

When Political Partisanship And The Military Collide : NPR 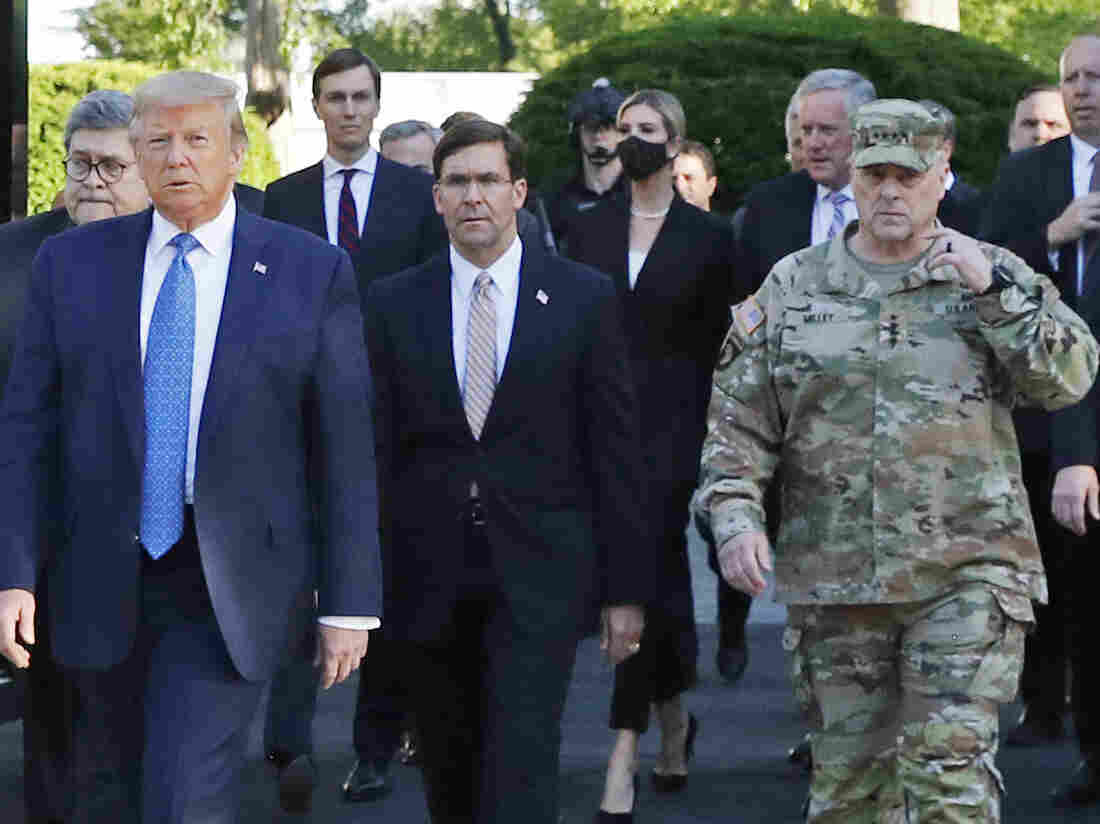 President Trump walking from the White House to St. John’s Church on June 1. Gen. Mark Milley (far right), chairman of the Joint Chiefs of Staff, was among those walking behind the president. Milley says his presence was “a mistake” that he has learned from, but the incident has prompted discussions about how the military can maintain nonpartisanship within the Trump administration. 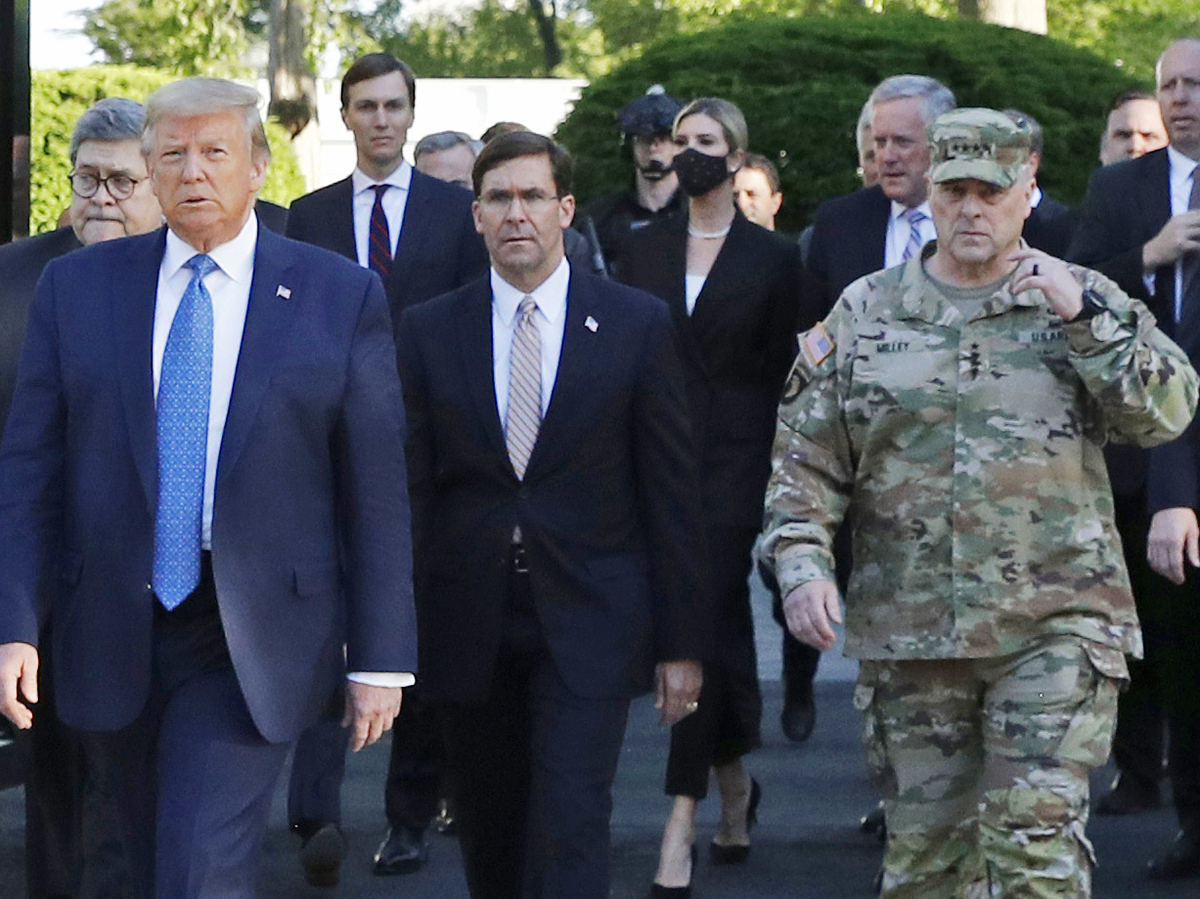 President Trump walking from the White House to St. John’s Church on June 1. Gen. Mark Milley (far right), chairman of the Joint Chiefs of Staff, was among those walking behind the president. Milley says his presence was “a mistake” that he has learned from, but the incident has prompted discussions about how the military can maintain nonpartisanship within the Trump administration.

Last year, Australian Defense Minister Christopher Pyne, flanked by his senior officers, was answering questions from reporters. Then he was asked a question that centered on politics.

As Pyne began to answer, one of those officers, Gen. Angus Campbell, Australia’s chief of defense, strolled over and tapped him on the shoulder. Pyne seemed almost startled.

“My apologies,” Campbell said. “I might ask that the military officers step aside when you’re answering these questions.”

With that the assembled officers walked off.

The incident was a dramatic lesson in civil military relations. The military is supposed to be nonpartisan, selflessly serving a nation and not seen as linked to any political party.

“General Campbell could serve as a very positive role model for our general and flag rank officers,” says David Segal, an emeritus professor at the University of Maryland College Park and a military sociologist.

Retired Army Col. Peter Mansoor, once a top aide to Gen. David Petraeus and now a professor of military history at The Ohio State University, has met Campbell before and was impressed by his action that day.

“But taking an action like this always comes with some risk,” Mansoor says, “and flag officers need to have the courage to risk being relieved when they cross their civilian superiors.”

Peter Feaver, a Duke University professor who specializes in civil military relations, says Campbell “did it exactly right, even with panache. This was a wonderful object lesson on respectful social distancing.”

Such social distancing — politically — was not evident in early June when Joint Chiefs chairman, Gen. Mark Milley, walked with President Trump as he hoisted a bible in front of St. John’s Church in Lafayette Square, which had just been aggressively cleared of protestors.

Retired Marine general and defense secretary James Mattis called it a “a bizarre photo-op for the elected commander-in-chief, with the military leadership standing alongside.”

“I am deeply worried,” he wrote, “that as they execute their orders, the members of our military will be co-opted for political purposes.”

With criticism rising on social media, and calls for him to resign, Milley apologized in a taped address to the National Defense University graduates, the future admirals and generals.

“As many of you saw the result of the photograph of me at Lafayette Square last week, that sparked a national debate about the role of the military in civil society,” Milley told the graduates. “I should not have been there. My presence in that moment and in that environment created a perception of the military involved in domestic politics. As a commissioned uniformed officer, it was a mistake that I’ve learned from, and I sincerely hope we all can learn from it.”

“I thought his apology was pretty well done,” says Feaver, the Duke University professor, “delivered in exactly the correct available venue: a teaching moment for other military professionals.”

Milley’s apology also raises questions for all military professionals in the age of Trump, who at times fails to adhere to the traditional separation of military and politics that can slide into outright partisanship — with the president referring to “my generals” or suggesting that soldiers at one base supported him.

“[Trump’s] definitely bending the norms,” says Nancy Sherman, a Georgetown University professor who teaches military ethics. “There’s enormous frustration at how you dodge the bullets. They’re really struggling with how to distance themselves with objections to policy as opposed to objections to a person.”

So what’s a senior military officer to do? Walk off like Gen. Angus Campbell? Apologize later like Gen. Mark Milley? Or just anticipate when an officer shouldn’t be standing behind the president at an event? 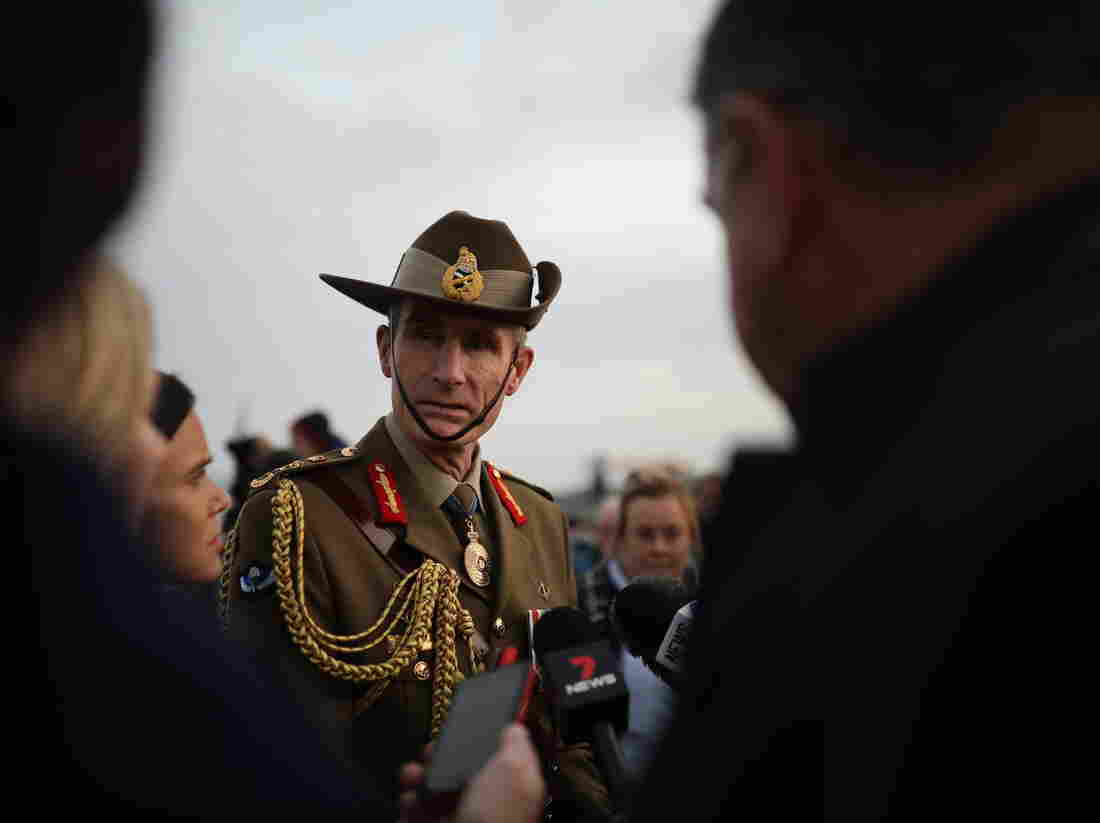 Australia’s Defense Force Chief Gen. Angus Campbell talks to members of the media following a ceremony at the Lone Pine Cemetery in Turkey in April 2018. Some point to him as an example of how to conduct civil military relations. 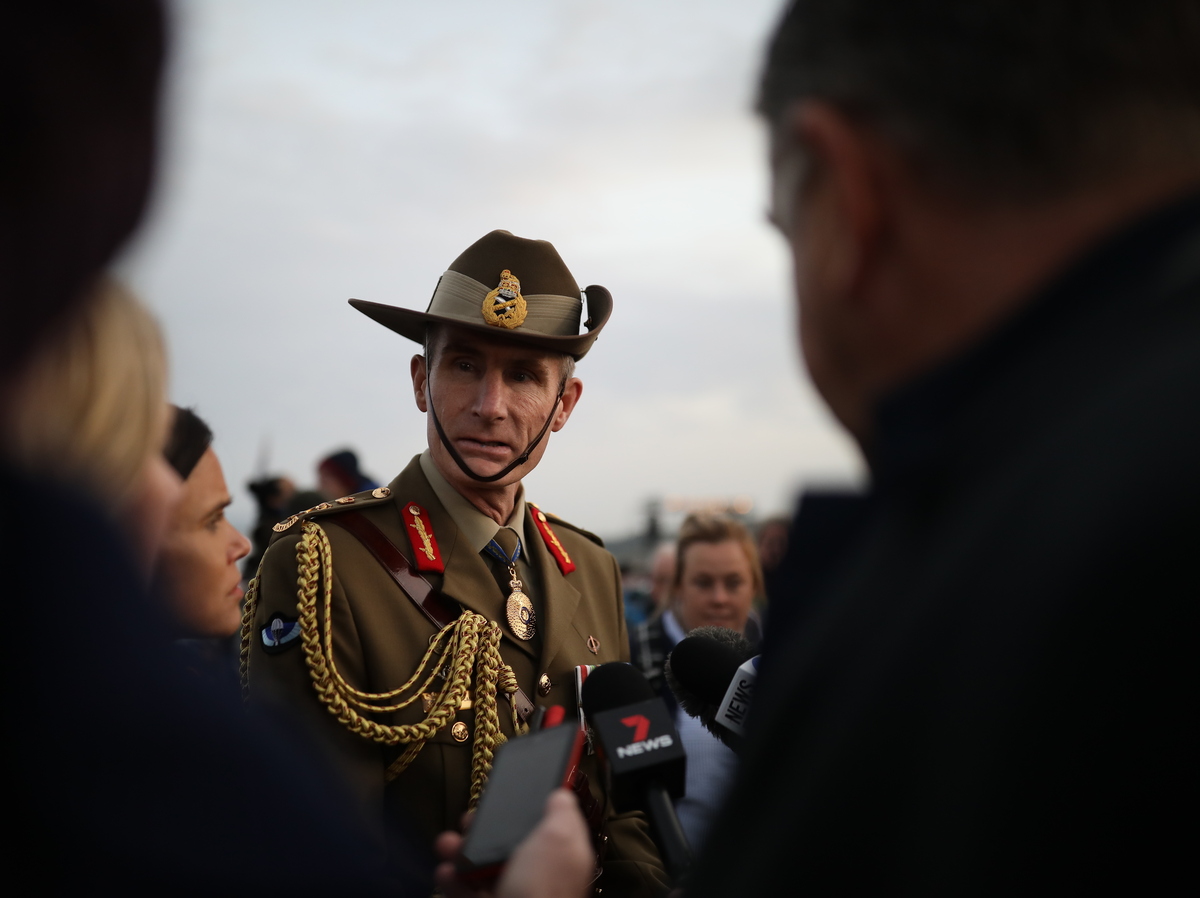 Australia’s Defense Force Chief Gen. Angus Campbell talks to members of the media following a ceremony at the Lone Pine Cemetery in Turkey in April 2018. Some point to him as an example of how to conduct civil military relations.

Sherman says at some point “you might have to resign,” although most officers dismiss such a drastic move, saying you deal with matters quietly and behind the scene.

“You need to understand what you are walking into before it happens,” one retired senior officer tells NPR. Some retired officials are quoted anonymously because they didn’t want to publicly weigh-in on such a sensitive issue with their former colleagues.

“It is their place of duty to be there but you do not condone any political misbehavior,” the retired officer continues.

That may be easier said than done, says Tammy Schultz, who teaches at the U.S. Marine Corps War College.

“You have identified what I would call a Catch-22,” she says.

Schultz says she plans on using the incident as a class simulation – but changing all the names.

One retired senior officer tells NPR that uniformed military leaders, in particular the Joint Chiefs, “can’t solve the problem you describe. Nor should they try to “rein in” the president if he exhibits behaviors inconsistent and potentially harmful to civil-military relations.”

That should be left up to the Pentagon’s civilian leadership.

“The Secretary of Defense can and should,” said the officer. “He sits at the intersection of the military and politics.”

And Congress also has a role, and “in my experience they have a deep interest in the relationship between the military and society.”

But the officer says, “they don’t always exercise that interest consistently.”

For Mansoor, the retired Army officer and professor, Trump may continue to try to use the military as a prop, especially with a tough reelection fight looming.

“The time may come between now and the November election when senior military leaders will need to visibly excuse themselves from accompanying the president on reelection photo-ops and speeches,” Mansoor says. “Given Trump’s emphasis on personal loyalty, we’ll see what happens if they do.”