Home  »  Economy   »   The US economy is performing strongly, but has it hit the high-water m…

The US economy is performing strongly, but has it hit the high-water m…

It took more than half a year, but by the start of this week, the benchmark S&P 500 equity index was within striking distance of its record closing high set on January 26, just days before an eruption of volatility sent US stock markets into a tailspin.

The swift recovery and strong performance of US equities has been one of the dominant themes in global markets this year.

It has been all the more remarkable given the plethora of risks confronting US stocks. These include an intensifying trade war between the United States and China, a more hawkish Federal Reserve, concerns about the sustainability of the rally in technology shares which has driven the market higher and, last but not least, the US midterm elections in November, which could help determine whether President Donald Trump is re-elected in 2020.

What is more, it is not just US stocks that are performing strongly in the face of growing uncertainties.

In the second quarter of this year, America’s economy expanded at its fastest clip in nearly four years, buoyed by last year’s US$1.5 trillion tax cut, which has boosted consumption and investment. The Fed’s preferred measure of inflation, moreover, stands at just below 2 per cent, allowing the central bank to keep raising interest rates at a relatively measured pace.

Tariffs are working far better than anyone ever anticipated. China market has dropped 27% in last 4months, and they are talking to us. Our market is stronger than ever, and will go up dramatically when these horrible Trade Deals are successfully renegotiated. America First…….

Not surprisingly, Trump has been quick to take credit for the strong performance of the country’s economy and markets, dismissing concerns that growth and valuations have more or less peaked. In one of his countless self-congratulatory tweets, the president also singled out this year’s plunge in Chinese shares as evidence that his administration is winning the trade war.

There is no question that the US is strongly in favour with investors right now. JPMorgan notes that the global economy has experienced a “unilateral US upturn” since the start of this year as other regions, notably the euro zone and China, have slowed. In the markets, four of the six best-performing assets this year are American, and include the tech-heavy Nasdaq Composite index, the S&P 500 and the US dollar on a trade-weighted basis.

The question is whether this is as good as it gets for US assets and whether investors should already be rotating into other regions, where valuations are much cheaper and where the risks have already been discounted. 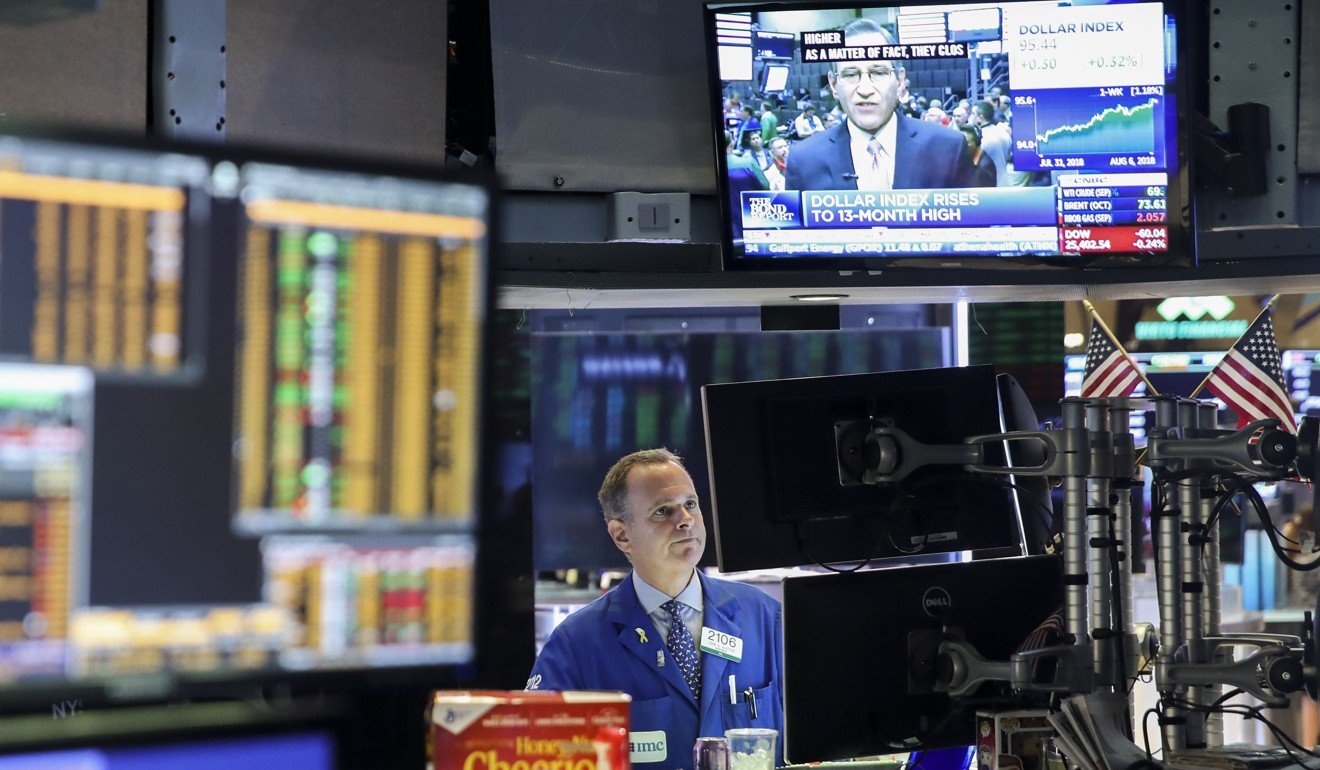 When earnings are up, why do investors anticipate a downturn?

Part of the answer lies in earnings. The main reason US stocks have proved so resilient is companies’ stellar growth in profits, flattered by last year’s corporate tax cut. With 80 per cent of firms listed on the S&P 500 having reported second-quarter results, earnings are up 24 per cent year-on-year, the second-strongest growth rate since 2010, according to FactSet, a data provider.

Yet, analysts expect earnings growth to fall to 8 per cent by the end of the first half of 2019.

Investors, however, have yet to price in significantly lower profit growth next year. US equities have not only recouped nearly all their losses since January, tech stocks, led by the so-called FAANG (Facebook, Apple, Amazon, Netflix and Alphabet, parent company of Google) bloc, remain the most crowded trade, according to the latest monthly survey by Bank of America Merrill Lynch.

Put simply, the valuation premium investors are willing to pay to hold US shares is rising again – American stocks are cheaper than they were late last year but are becoming pricier relative to European and emerging market equities – despite increasing uncertainty about fundamentals, as the distorting effects of the tax cut disappear and the economy starts to slow in the coming quarters.

In emerging markets, by contrast, the risks have been priced in – excessively so in the case of China’s battered stock market – which provides a better entry point for investors when sentiment improves. In the euro zone, meanwhile, although earnings estimates have been revised down sharply mainly due to concerns about growth, the absence of a large tech sector could end up benefiting Europe’s stock markets if the FAANGs fall out of favour.

To be sure, the rally in US stocks almost certainly has further to run given the robustness of the economy and the strength of earnings. Yet last quarter’s 4.1 per cent GDP growth rate and 24 per cent growth in corporate profits represent a high-water mark.

The global trading order has bigger problems than Donald Trump

From here on, the investment landscape is likely to get a lot more challenging, particularly if the trade war escalates further.

Trump’s pro-growth policies have been a boon to the US economy and markets, so much so that the president is feeling increasingly emboldened in his trade offensive against China. If the stock market rally continues, Trump is likely to dig his heels in.

US equity bulls should be careful what they wish for.

Nicholas Spiro is a partner at Lauressa Advisory