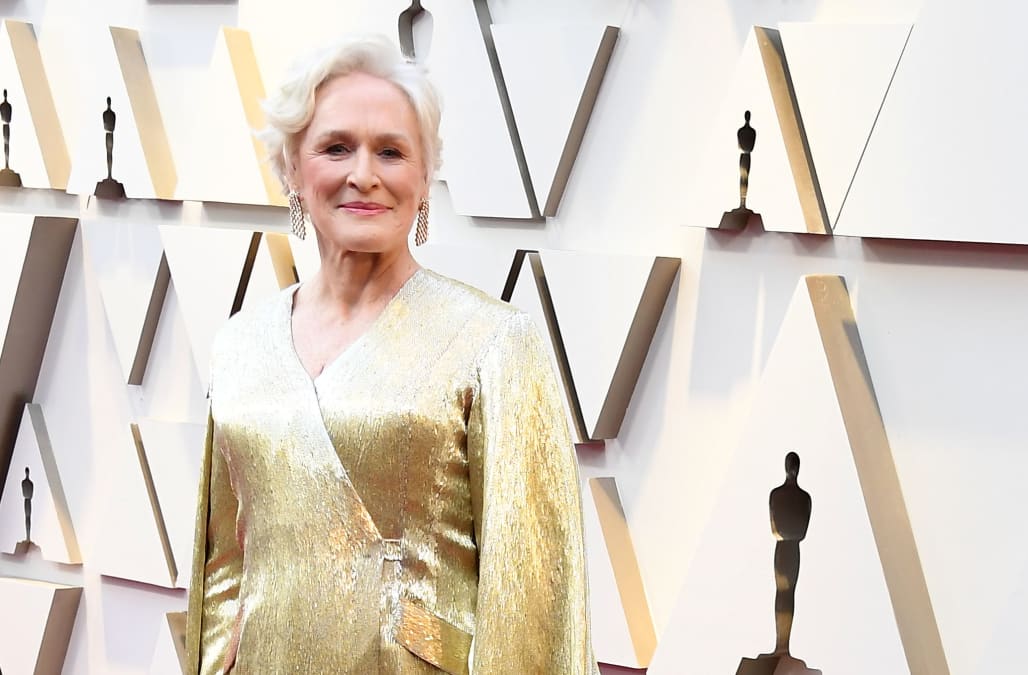 The Oscars are known for bringing out stars best and often boldest looks of the awards season. And while one of the most obvious trends of the 91st Academy Awards was “power pink,” several stars also opted to shine (quite literally) in sparkly metallic looks.

Jennifer Lopez, attending as a presenter, donned a long sleeve body-hugging Tom Ford gown covered in silver mirror-like embellishments. The gown was so shiny that when it caught the sunlight, it reflected sparkles onto everything around her, as shown in an Instagram post by her hair stylist Chris Appleton.

Glenn Close, nominated for best actress, looked like a literal Oscar statuette in a long sleeve gold floor-length cape and matching gown by Carolina Herrera. She told Ryan Seacrest on the red carpet that the whole ensemble weighed 42 pounds and was covered in 4 million beads!

Jennifer Lopez glittered on the red carpet thanks to her sequined Tom Ford look.

Kiki Layne was a vision in a light pink Atelier Versace dress, complete with statement bow.

Amy Adams was the picture of Old Hollywood glamour in her sparkly Versace gown.

Molly Sims, in Zuhair Murad Couture, was among a slew of stars to opt for head-to-toe sequins.

Miley Cyrus looked every bit the pop princess she is in a black Saint Laurent dress with a plunging neckline.

Alessandra Ambrosio wowed in a blue Zuhair Murad Couture dress that showed off her legendary figure.

Emma Roberts’ sheer Yanina Couture dress was one of our favorite looks of the night.

Gemma Chan’s sexy Tom Ford number made for a perfect after party choice.

Kate Bosworth went with a sunshine yellow dress from Cong Tri and it did not disappoint.

Michelle Yeoh of “Crazy Rich Asians” stunned in Elie Saab. Her gown was decorated with an intricate silver design that was concentrated on the dress’ bodice and continued onto the bottom of her sheer beige skirt.

To copy the look at home, Marshalls‘ styling expert Melissa Garcia recommends wearing a metallic jacket or cardigan with denim. “I love the idea of incorporating metallic as a layering piece, this way you don’t have to commit to it for the entire day/night.”

See these and the rest of our favorite metallic looks from the Oscars in the gallery above!

“We wanted Gemma’s look to combine glamour with a little bit of coolness to give off French actress vibes, like Brigitte Bardot, something intentional but also effortless.”

“As always, I take my cues from Kacey’s fashion choice and her stylist Erica Cloud dressed her in what she calls ‘cotton candy confection’ in the show-stopping Giambattista Valli Haute Couture,” explained makeup artist Moani Lee to Harper’s Bazaar on the country star’s look.

The singer also worked with hair stylist Giovanni Delgado, who used Oribe products to get her ready for the red carpet.

To show off her Tiffany Diamond, Lady Gaga opted for a dramatic updo and simple makeup. Celebrity hairstylist Frederic Aspiras went with “a clean simple upswept hairstyle that creates softness around face.” He used the ghd Air Hair Dryer to complete the look.

The model took the Oscars red carpet in a chic bob thanks to celebrity hairstylist Harry Josh. Harry Josh Pro Tools and Aveda products were used for her look.

“I can’t believe I’m saying this, but in all the years I’ve been a hairstylist, this is my favorite Oscars yet,” explained Dove celebrity hair stylist Mark Townsend. “Rachel’s look tonight is the definition of couture – this is fashion that is art. When I saw the pictures earlier this week, I immediately knew the hair needed to be sleek to compliment the timeless Cartier hair pins and her two-piece Givenchy latex gown.”

Emilia Clarke ditched her naturally blonde looks in favor of a brunette ‘do at last night’s Oscars.

“Emilia returned to a rich brunette for the Oscars — a really
rich, healthy glossy shade that is just a touch darker than her
natural color,” explained celebrity hairstylist Nicola Clarke. “I used Virtue ColorKick to amp the gloss and shine and maintain the health of the hair during the color
process.”

The star took the stage for her fourth Oscars performance last night and looked beautiful as ever. She worked with celebrity makeup artist Adam Burrell using Burt’s Bees.

“We wanted to strike a balance of classic and cool. The hair was waved and slightly undone with the ‘classic John D.’ hair as Amy calls it. Our inspiration was 70’s mermaid vibes: playful and gorgeous.”

“When I saw her in the Zac Posen dress I was immediately inspired by Sophia Loren and wanted her to have a face and body moment with the hair off the face,” said TRESemmé Global Stylist, Justine Marjan, who used a ghd AIR hair dryer and TRESemmé products for her look. “We did an elegant braided ballerina bun with custom Jennifer Behr bows throughout.”

The Bohemian Rhapsody star has been a red carpet favorite this awards season — and last night’s look is no exception. The actress worked with Chantecaille cosmetics for her red carpet look, while Suave Celeb Stylist Jenny Cho tackled her blond locks.

These were the prettiest dresses at the 2019 Oscars

56 of the most breathtakingly gorgeous Oscars dresses of all time