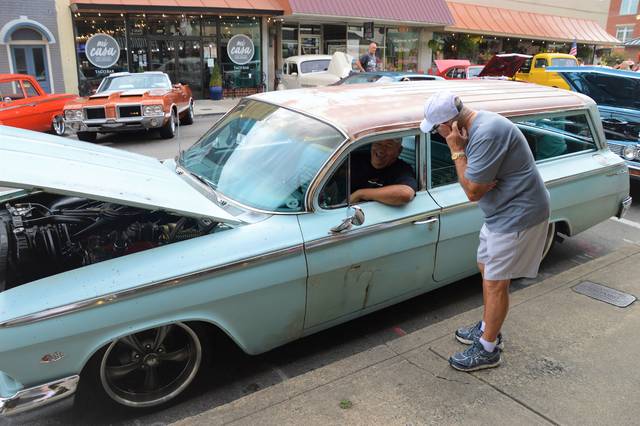 In addition to sponsoring the event, Jeff Boles loves to show off his toys at the Mayberry Cool Cars & Rods Cruise-In. This time, Boles chose to present his 1962 Bel Air Wagon. – Cory Smith | The News 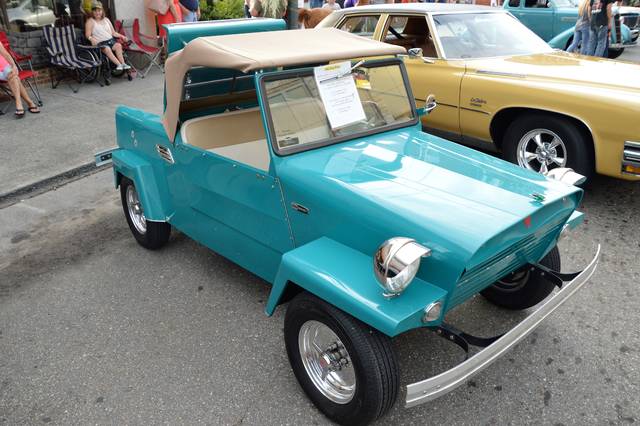 Cars of all shapes and sizes came out to the Mayberry Cool Cars & Rods Cruise-in, like this 1962 King Midget. – Cory Smith | The News 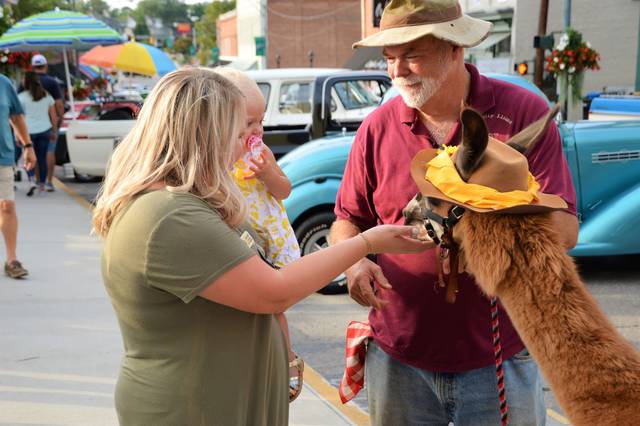 Amidst the sea of classic cars and trucks was a different type of transportation: a llama from Llamas in Mayberry. – Cory Smith | The News 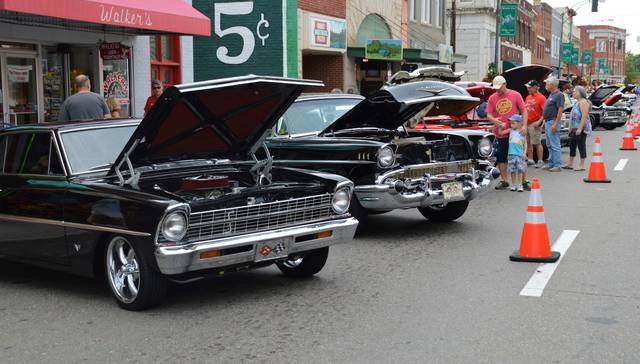 Phil Marsh of the Mount Airy Downtown Business Association reported that close to 500 cars were displayed at last weekend’s Cruise In, with thousands more cruising down Main Street to admire them. – – Cory Smith | The News

Nearly a century of vehicles were represented at the August edition of the Cruise In. No matter what kind of four-wheeled contraption (sometimes more, sometimes less) you sported, the Cruise In was created to give car lovers a place to display, interact and learn with those of similar interests.

The Cruise In isn’t just for local residents, either. Phil Marsh of the Mount Airy Downtown Business Association reported that guests from as far as Kentucky and Maryland made the trip to Mayberry for the event. Marsh also expressed gratitude, on behalf of himself and the DBA, to everyone that continues to come out to the event and making it such a positive experience.

While some visitors were making their debut appearance at the show, one guest of Saturday’s event is among those that have been around since the very beginning: Jeff Boles.

Boles’ experience with car shows and cruise-ins predates the Mayberry event. He was part of a club called Granite City Rods and Machines for nearly 25 years. The club held cruise-ins at the old Lowe’s Hardware building on Highway 601 for years. The group also traveled all over the country to attend different shows.

After the group dissipated, a few members continued their travels before eventually deciding to start a cruise in Pilot Mountain. Boles’ body shop, Jeff’s Paint and Body, is now a major sponsor for the Pilot show as well as a minor sponsor for the Mount Airy show.

“I’ve always just liked old cars, of course, and to be able to support our hobby, which is the best way to put it I guess, means a lot to me and that’s why I do that,” Boles said. “I feel like it’s an important thing that needs to carry on to the younger generation.”

This hobby has transformed into a lifestyle over the years.

“You spend your vacations and vacation time at some car show somewhere,” Boles said, recently attending a show in Kentucky that featured more than 14,000 cars. “Even when you’re not at a show, you’re riding around and looking at everything, always wanting one more.”

Boles said he’s been fortunate in his life to not only work in something he’s so passionate about, but he also has the ways and means to pass his knowledge to the younger generations. Just walking up and down Main Street, Boles can be seen chatting with friends and strangers about their vehicles, what work they’ve done and how to move forward.

The main outlet Boles has for teaching others is at Surry Community College, where he has taught for 22 years.

“Although it is for educational purposes, we have a lot of fun,” Boles said. “We get over there and we show them how to fix their cars, what it needs and the steps they need to do it. You’re passing on a skill, or a trade I guess you call it. We have a good president that supports us and it makes a big difference to have that backing.”

Another area of support Boles possesses is with his wife, Shelby, who owns another Main Street attraction, The Dapper Hound.

“You have to have support and someone that likes it as well,” Boles said. “She may not go to all the shows, but she does support my interest in it and my hobbies. Of course you have to do that both ways. You know, she’s a scrapbooker and so if she wants to go to Hobby Lobby, we go to Hobby Lobby.”

Boles compared what he does to restoring an old building in Mayberry.

”It’s sort of the same other than that there’s wheels on it and you can drive it,” Boles said. “They take these buildings and try to make them look beautiful like they were back in the ’50s, and that’s sort of the way you do the car. You update all the stuff so you can drive it, have a good time and go long distances, but it’s still the same look. You don’t want to change any of the look, most of the time, if you can help it.”

The man who has owned somewhere around 30 cars in his lifetime was sporting his 1962 Bel Air Wagon. He found it at a car show in Kansas and offered to purchase it, saying it looked like a lot of fun to drive. However, his initial attempts to buy it were unsuccessful due to a sizable roadblock.

“A week or so later, he (the seller) called and said his girlfriend was mad that he sold it and he backed out for a while. A few months later I called him and talked to him some more and wound up buying it.”

Even though Boles said the car may not be in the best shape compared to some of his other vehicles, the nine-passenger wagon makes for a great family car. He said he uses it to take his wife, children and grandchild on trips without worrying about scratching or denting it.

The wagon already had a repaired air conditioner and engine when he bought it. All Boles had to do was install a new interior and door panels.

Boles loves to work on just about any car, but the 59-year-old said he’s had to sell some in the past that he just doesn’t have time to work on. For example, he recently had to sell a 1933 Ford Sedan he had become attached to.

Other cars he wouldn’t dare to sell because his children have already laid claim to them, such as a Nova and a three-window 1933 Ford Coupe. He also is fixing up a truck that his grandson wants to keep, even though he’s got another decade plus until he can legally drive it.

Boles hopes to retire in the not-so-distant future, but doesn’t ever want to stop working on cars. His retirement isn’t to get out of the field, but rather make time to work on some of his own projects.

In addition to the September Cruise In, the Downtown Business Association will be hosting a Moonshine Racer’s Reunion.

The Reunion, set for Saturday, Sept. 14, is a free event that will feature close to 80 vintage dirt track and moonshine race cars. Drivers will also have the option to take a lap around Race Track Road, formerly White Dirt Race Track, where races took place in the 1940s.

In addition to sponsoring the event, Jeff Boles loves to show off his toys at the Mayberry Cool Cars & Rods Cruise-In. This time, Boles chose to present his 1962 Bel Air Wagon.

Cars of all shapes and sizes came out to the Mayberry Cool Cars & Rods Cruise-in, like this 1962 King Midget.

Amidst the sea of classic cars and trucks was a different type of transportation: a llama from Llamas in Mayberry.

Phil Marsh of the Mount Airy Downtown Business Association reported that close to 500 cars were displayed at last weekend’s Cruise In, with thousands more cruising down Main Street to admire them.