Just one look at Alexandra Lapp’s Instagram page makes it clear to see she enjoys the finer things in life.

The fashion and travel blogger, 44, from Dusseldorf, boasts 260,000 followers on her social media platform and floods the fashion pages across several magazines.

A former model who worked until she was 42, Alexandra is also a busy fashion entrepreneur who shows no sign of slowing down any time soon.

Her Instagram fans follow her trips and engagements as she hops from one country to the next – whether it’s to attend exclusive fashion shows, cosy up to the trendiest designers or simply relaxing on a Greek beach.

And while this content doesn’t sound too different from other influencers who’ve made a business of documenting their lavish lifestyles, the online sensation has told Femail it’s her age that sets her apart. 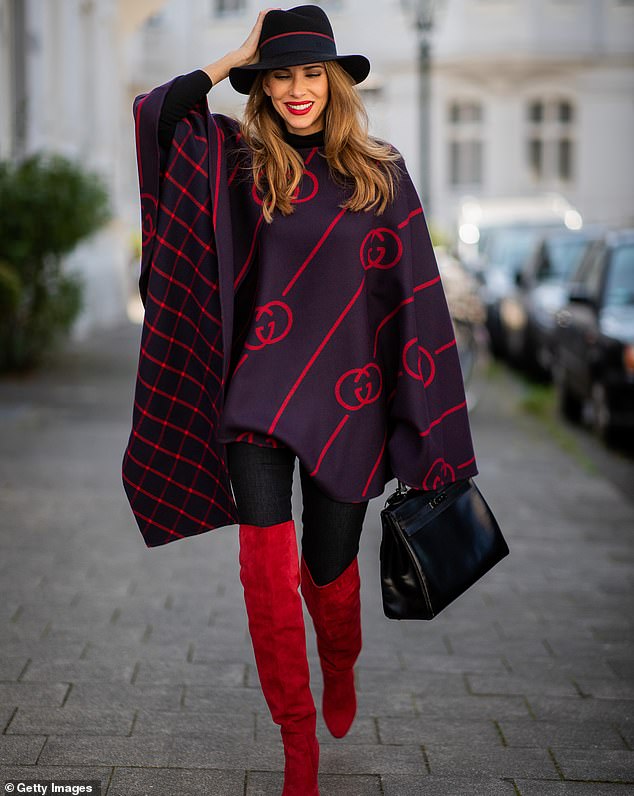 Influencer Alexandra Lapp (pictured), 44, from Dusseldorf, started her fashion blog in 2015, thanks to the encouragement of her sister and friends. She is now an established Instagram success 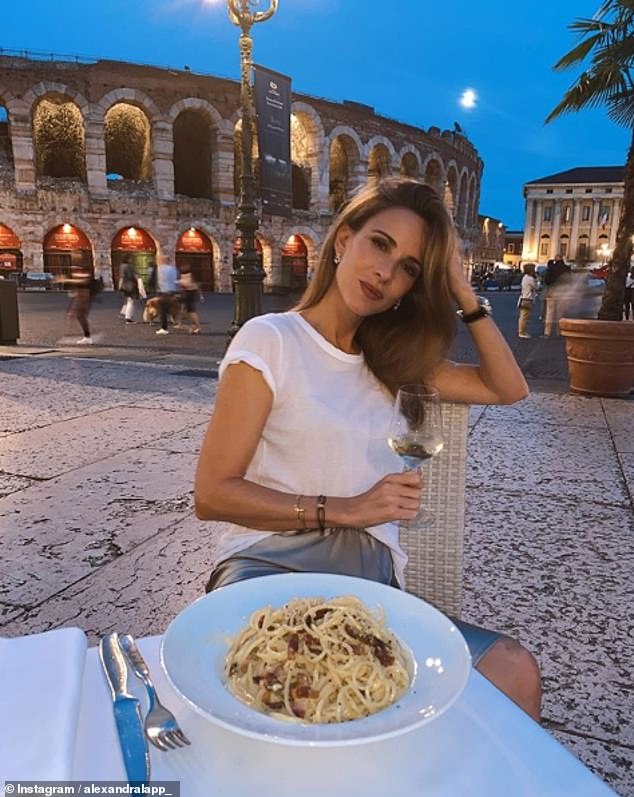 The influencer said being over the age of 40 was part of her success because women that age have a lot of ‘buying power’ but not much representation on social media. Pictured, during a trip to Verona 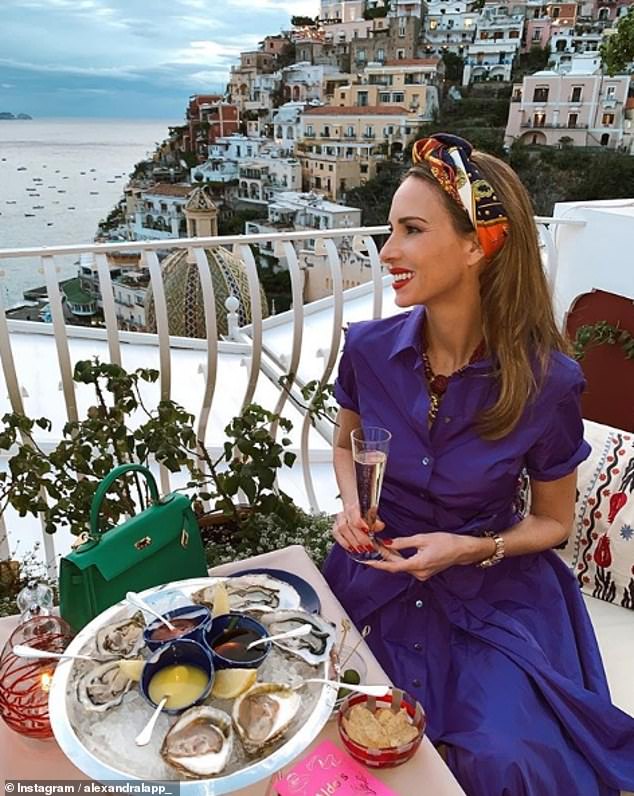 Alexandra said she will have completed around 35 trips abroad in 2019 along – and has many more planned for 2020. Pictured, enjoying oysters in Positano, Italy 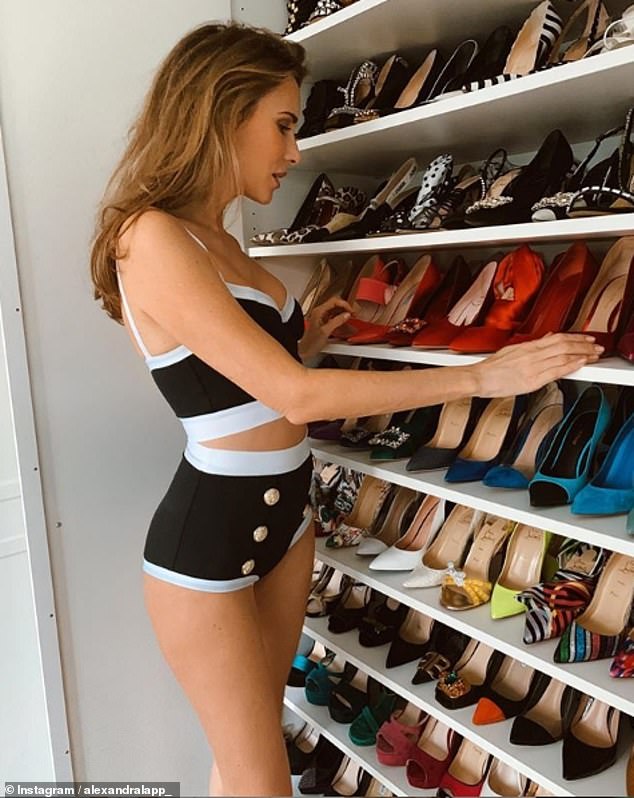 The influencer revealed she owns about 400 pairs of shoes and 90 designer bags in her wardrobe. Pictured, admiring her collection at home

‘I guess a big success factor is surely my age as there are not a lot of women blogging past 40,’ she explained.

‘But there are many women of my age and older with buying power out there looking for styling advice and inspiration.’

She continued: ‘I never expected to receive that kind of visibility that fast therefore, this was a very pleasant surprise and helped me to establish myself in the fast-paced blogger industry swiftly.’

Alexandra started her blog in 2015 after encouragement from her sister, Isabel. 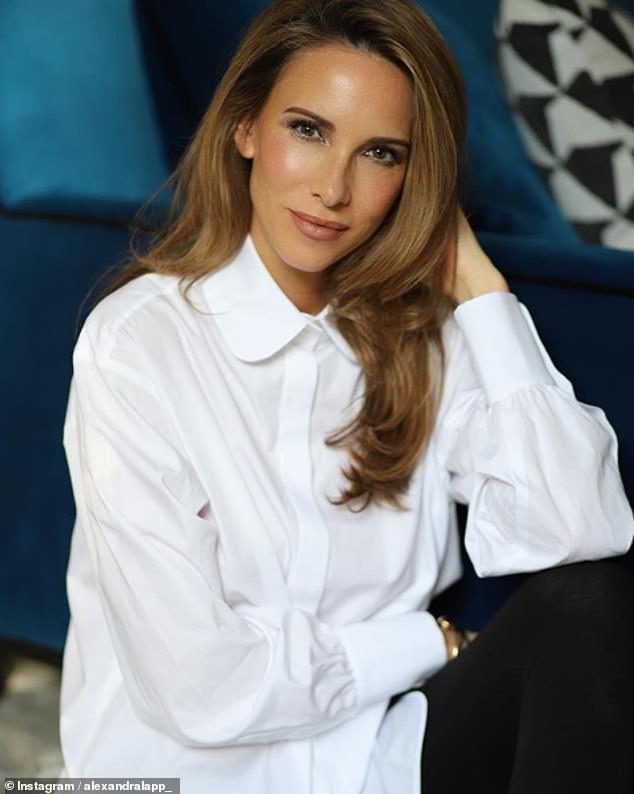 Alexandra (pictured) worked as a model from the age of 17 until she was 42, and then dedicated herself to her blogging completely 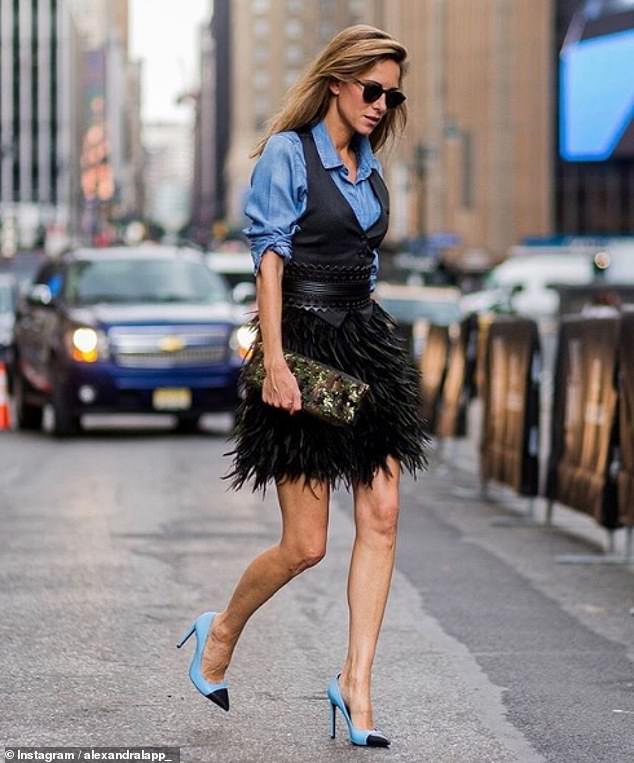 Alexandra admitted she doesn’t know what her net-worth is. Pictured, walking down the streets of New York earlier this year 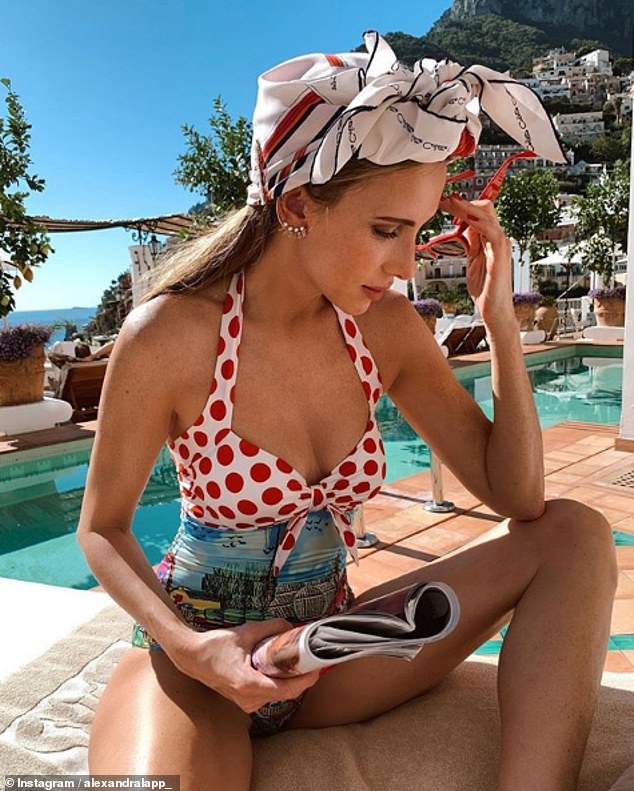 The influencer told how she travels most weeks. Pictured, enjoying the sun in designer swimwear in Greece this summer 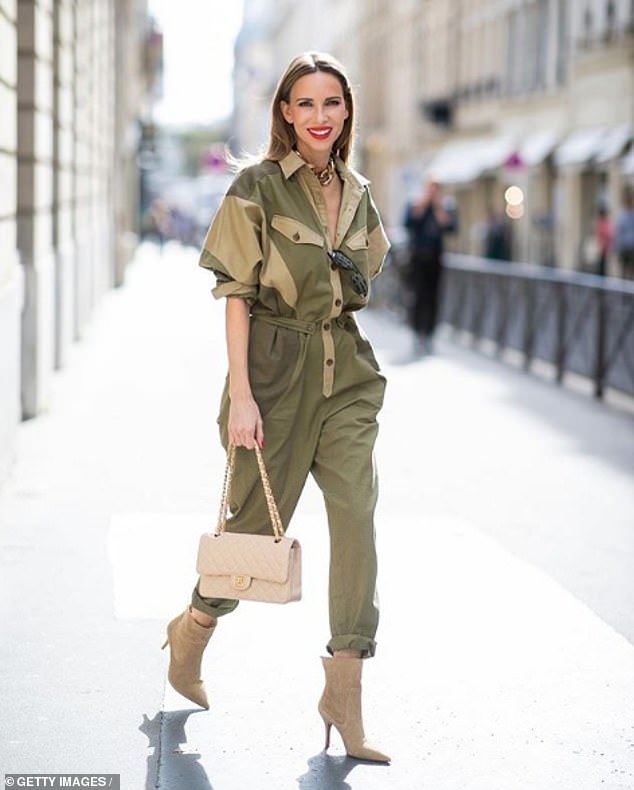 She is often compared to Sex and the City’s Carrie Bradshaw, due to her love of fashion.

The nickname is well-deserved as Alexandra, who is known as ‘The Influencer in heels,’ owns 400 pair of shoes and 90 designer bags – including the likes of Chanel, Hermès, Gucci and other well-established names.

Alexandra gained prominence in the fashion world thanks to her blogging and admits she has no idea what her net-worth is.

She boasts an impressive portfolio with brands she’s collaborated with – such as Dior Beauty, Chanel Beauty, La Biosthetique, IWC, Christian Louboutin, Roger Vivier, as well as beautiful hotels around the world. 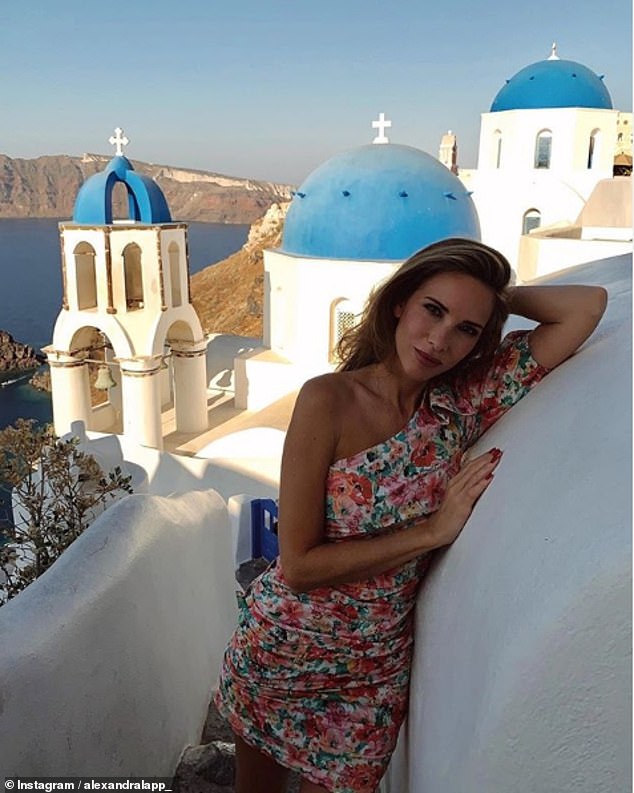 Alexandra, pictured enjoying the sunshine in Santorini, started working on her Instagram as soon as 7am after waking up

She’s also a keen traveller and admits there’s not a lot of times she’s not out travelling – so it’s no surprise by the end of 2019 she would have made about 35 trips around the world.

‘This year I have been to numerous amazing places like Positano, Ischia, Capri, Verona, Cannes, Santorini, Mykonos, Tirana, Berlin for Mercedes Benz Fashion Week, St. Tropez, Abu Dhabi, the Maldives, Paris for Paris Fashion Week, Venice for the Biennale, Marrakech and many many more…

‘I simply love travelling and exploring the world,’ she added.

But what looks like a life of leisure comes with hard work and Alexandra says she wakes up at 7am everyday and then takes several hours getting ready, before working all day on creating content for her blog, and writing articles on fashion or travel. 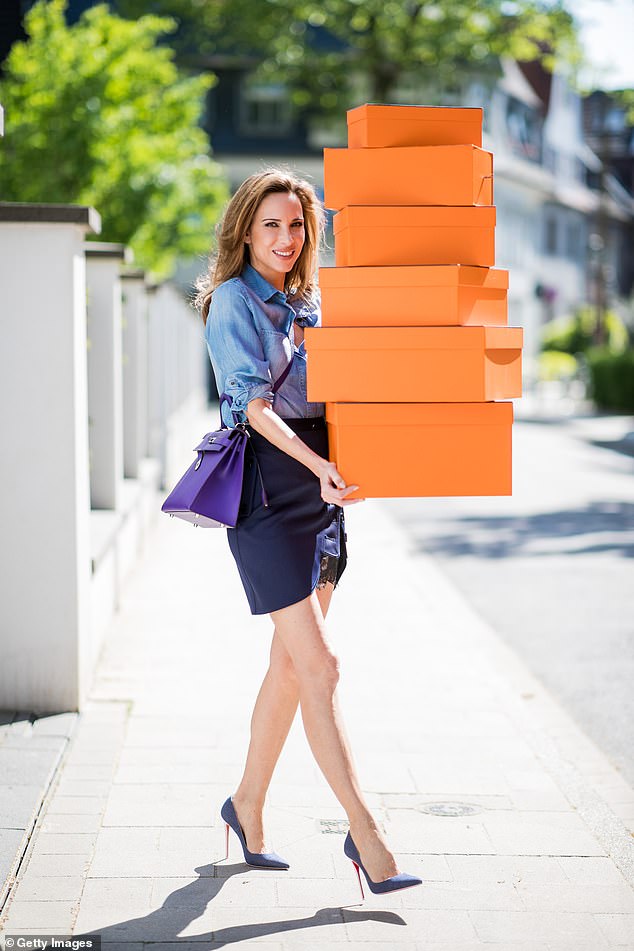 Alexandra admitted she didn’t think she would receive so much attention from her blogs. Pictured, carrying Hermes boxes while shopping for her network 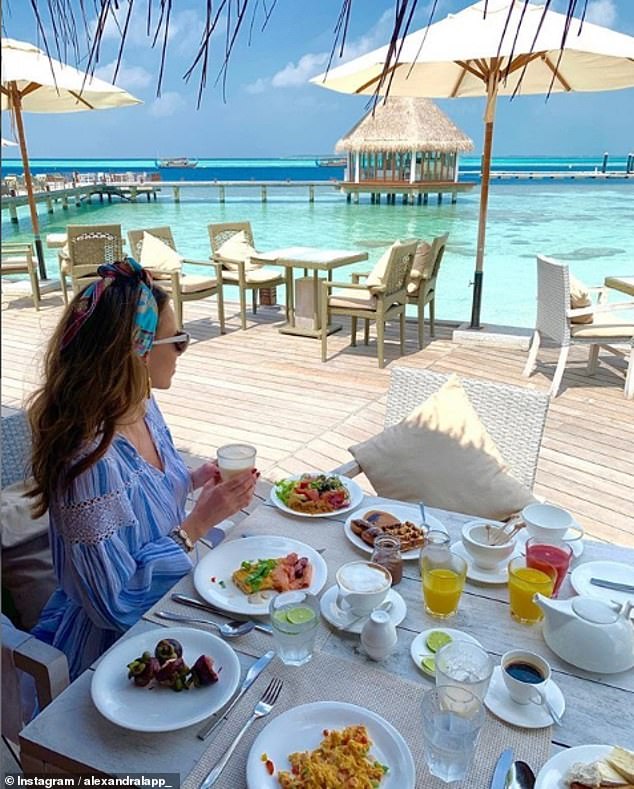 Who could resist lunch by the beach in the Maldives? Alexandra collaborates with hotels as well as fashion brands 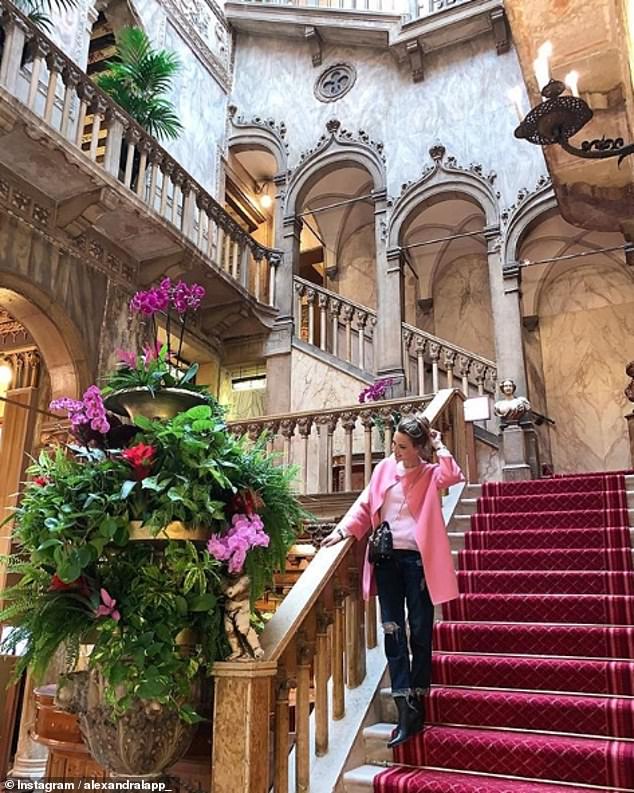