Coronavirus could trigger the biggest fall in carbon emissions since W…

Carbon dioxide emissions could fall by the largest amount since World War Two this year as the coronavirus outbreak brings economies to a virtual standstill, according to the chair of a network of scientists providing benchmark emissions data.

Rob Jackson, who chairs the Global Carbon Project, which produces widely-watched annual emissions estimates, said carbon output could fall by more than 5% year-on-year — the first dip since a 1.4% reduction after the 2008 financial crisis.

‘I wouldn’t be shocked to see a 5% or more drop in carbon dioxide emissions this year, something not seen since the end of World War Two,’ Jackson, a professor of Earth system science at Stanford University in California, told Reuters in an email. 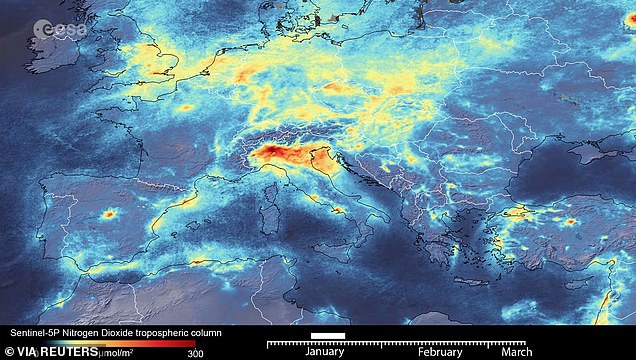 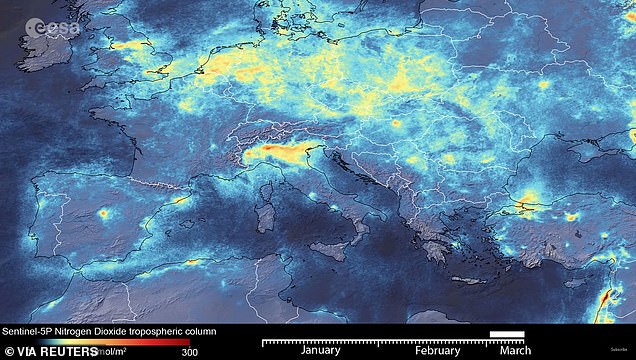 Global carbon emissions could fall by 5 per cent year-on-year in 2020 scientists believe, the first drop of any kind since 2008 and the largest fall since the Second World War (pictured, nitrogen dioxide pollution over Europe in January and March this year) 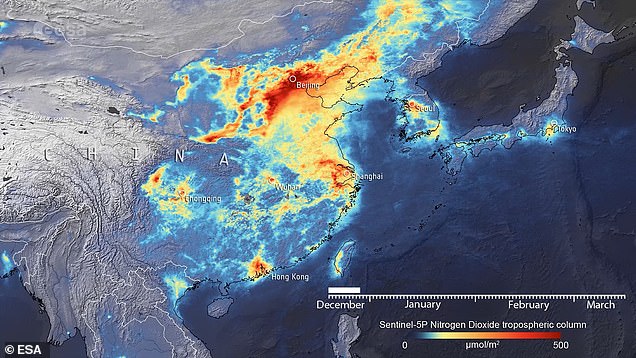 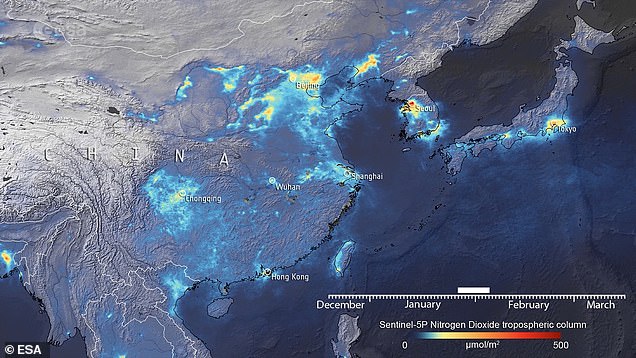 Half of the world’s population is now in coronavirus lockdown with economies shuttered while governments try to flatten the curve of infection, leading to a huge drop in pollution (pictured, nitrogen dioxide pollution over China in December and February this year)

‘Neither the fall of the Soviet Union nor the various oil or savings and loan crises of the past 50 years are likely to have affected emissions the way this crisis is,’ he said.

The prediction – among a range of new forecasts being produced by climate researchers – represents a tiny sliver of good news in the midst of crisis: Climate scientists had warned world governments that global emissions must start dropping by 2020 to avoid the worst impacts of climate change.

But the improvements are for all the wrong reasons, tied to a world-shaking global health emergency that has infected more than 950,000 people – while shuttering factories, grounding airlines and forcing hundreds of millions of people to stay at home to slow the contagion.

Experts warn that without structural change, the emissions declines caused by coronavirus could be short-lived and have little impact on the concentrations of carbon dioxide that have accumulated in the atmosphere over decades.

‘This drop is not due to structural changes so as soon as confinement ends, I expect the emissions will go back close to where they were,’ said Corinne Le Quéré, a climate scientist at the University of East Anglia in eastern England.

After world greenhouse gas emissions dipped in the aftermath of the 2007-2008 global financial crisis, they shot back up a whopping 5.1% in the recovery, according to Jackson. 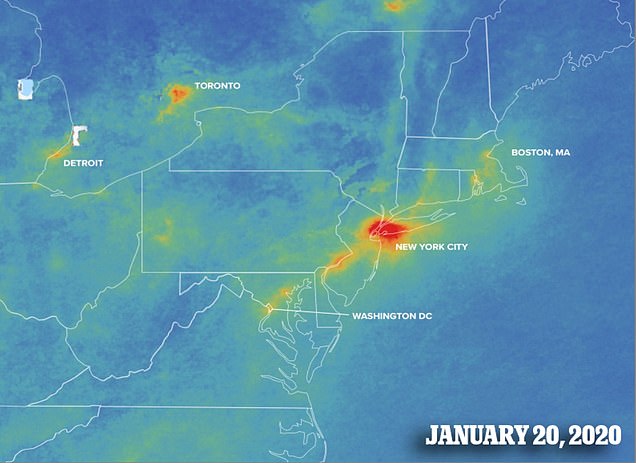 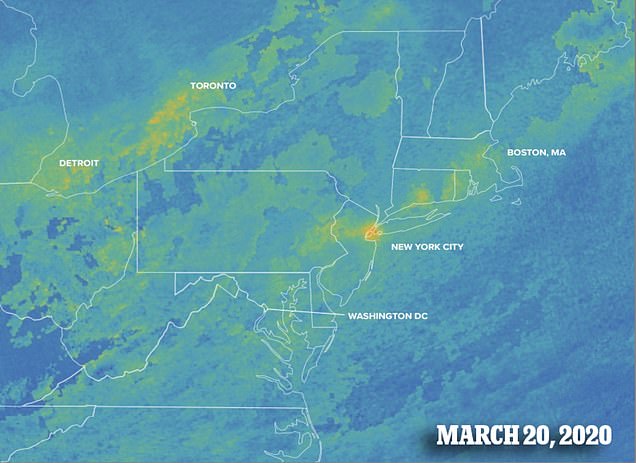 Graphs comparing the amount of nitrogen dioxide pollution on the US east coast between January and March. Nitrogen dioxide is released when carbon fuels, such as petrol and natural gas, are burned for energy 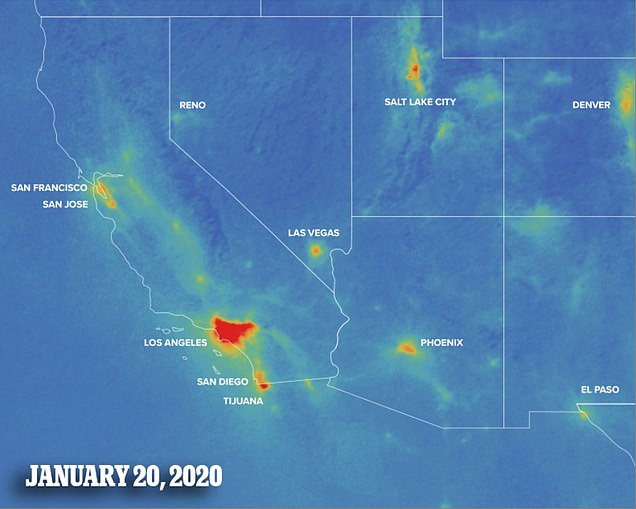 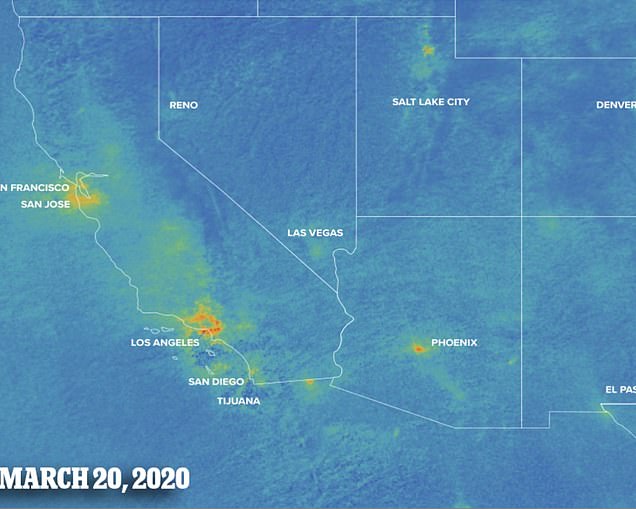 Graphs comparing the amount of nitrogen dioxide pollution on the US west coast between January and March, after lockdowns were put in place

The pattern of a swift rebound has already begun to play out in China, where emissions fell by an estimated 25% as the country closed factories and put in place strict measures on people’s movement to contain the coronavirus earlier this year, but have since returned to a normal range.

That kind of resilience underscores the magnitude of the economic transformation that would be needed to meet the goals of an international deal brokered in Paris in 2015 to try to avert the most catastrophic climate change scenarios.

A U.N. report published in November found that emissions would have to start falling by an average of 7.6% per year to give the world a viable chance of limiting the rise in average global temperatures to 1.5C, the most ambitious Paris goal.

‘I don’t see any way that this is good news except for proving that humans drive greenhouse gas emissions,’ said Kristopher Karnauskas, associate professor at the Department of Atmospheric & Oceanic Sciences at the University of Colorado Boulder.

With the world dependent for fossil fuels for 80% of its energy, emissions forecasts are often based on projections for global economic growth.

Last month, Glen Peters, research director of the Center for International Climate Research in Oslo, predicted carbon emissions would fall between 0.3% and 1.2% this year, using higher and lower forecasts for global GDP growth from the OECD.

A few days later, the Breakthrough Institute, a research centre in California, predicted emissions will decline 0.5-2.2%, basing its calculations on growth forecasts from JP Morgan, and assuming the global economy recovers in the second half. 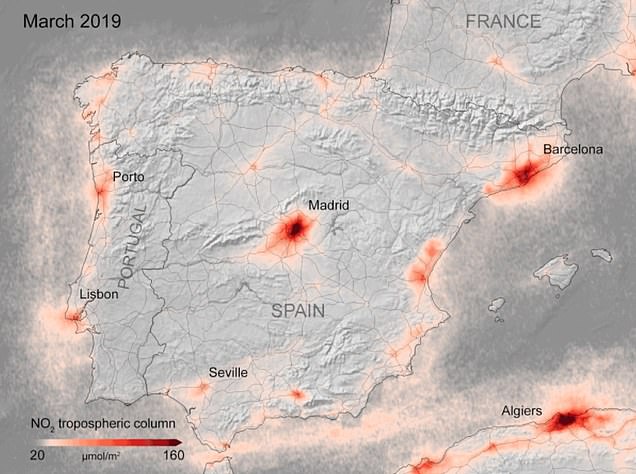 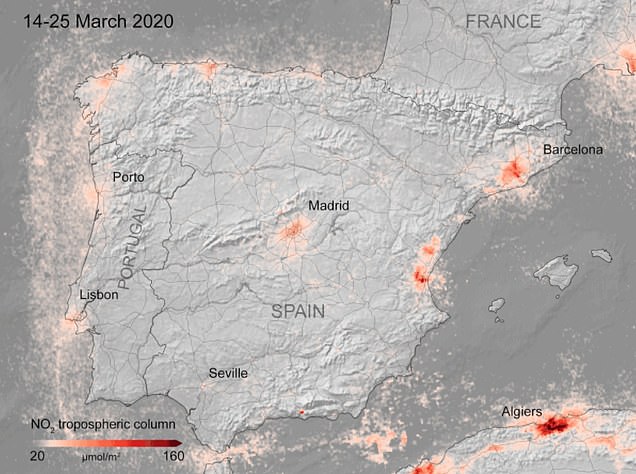 Climate scientists are urging governments to think about how economies can be restarted to ensure that emissions do not return to pre-coronavirus levels (pictured, nitrogen dioxide emissions over Spain before and after lockdown) 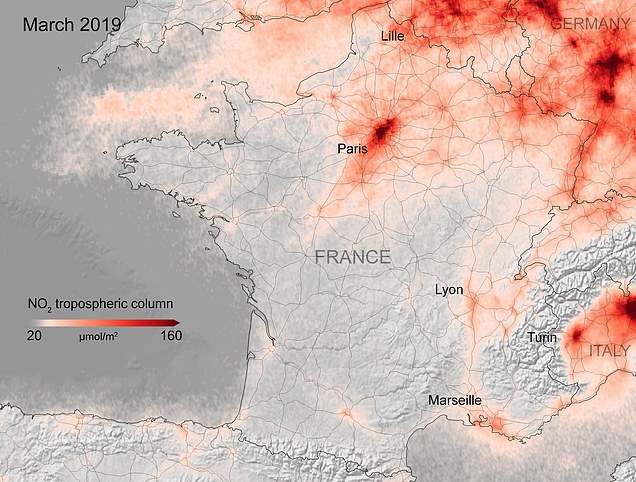 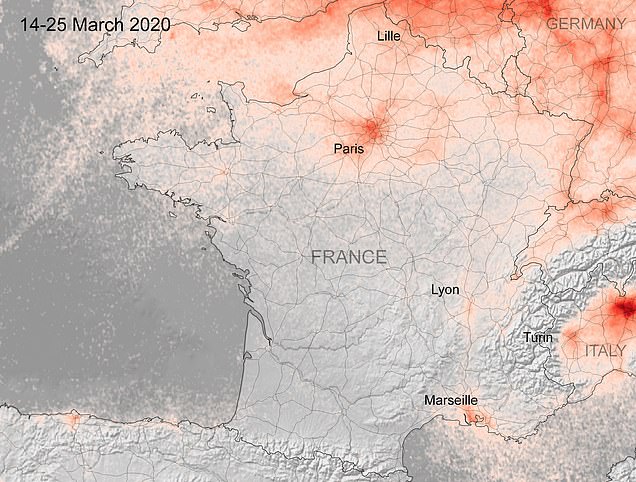 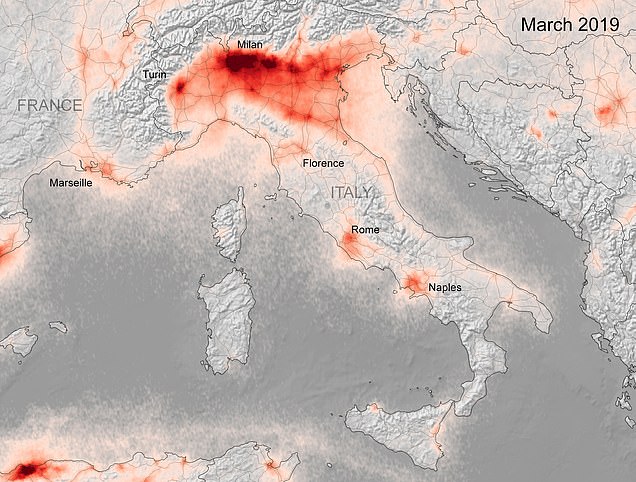 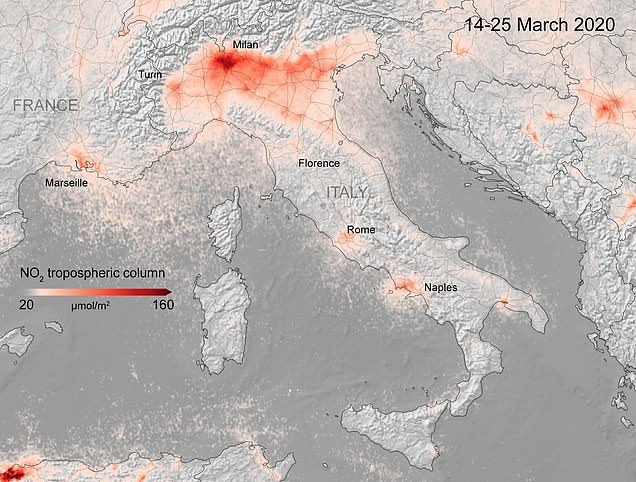 Satellite images showing how nitrogen dioxide emissions, which are produced when carbon fuels are burned, fell in Italy before and after lockdown

‘Our estimates indicate that the pandemic’s climate silver lining is vanishingly thin,’ said Seaver Wang, a climate and energy analyst at the institute.

‘It’s as if we went back in time and emitted the same amount we were a few years ago — which was already too much. In the grand scheme of things, it really makes no difference.’

Some foresee a bigger hit to the economy. The London-based Centre for Economics and Business Research estimates that world GDP will fall by at least 4% this year — albeit with a ‘huge margin of error.’

That drop would be more than twice as large as the contraction during the financial crisis, and the largest annual fall in GDP since 1931, barring wartime, the centre said.

With governments launching gigantic stimulus packages to stop their economies collapsing, investors are now watching to see how far the United States, and China, the European Union, Japan and others embrace lower-emission energy sources.

‘Even if there is a decline in emissions in 2020, let’s say 10% or 20%, it’s not negligible, it’s important, but from a climate point of view, it would be a small dent if emissions go back to pre-COVID-19 crisis levels in 2021,’ said Pierre Friedlingstein, chair in mathematical modelling of the climate system at the University of Exeter in southwest England.

‘This is why it is important to think about the nature of the economic stimulus packages around the world as countries come out of the most immediate health crisis,’ said Dan Lashof, U.S. director at the World Resources Institute.